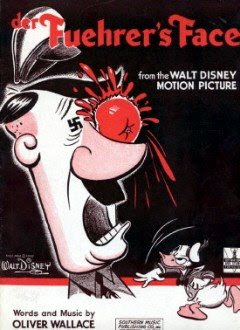 Recently, I’ve been pulling ideas for my posts from the 1940’s. Not that I intended to develop a theme, but I love it when a plan comes together. It’s Wacky Wednesday!; however, the idea behind this short film is not a wacky one, I just happened to really enjoy this cartoon and the message it delivers. I hope you will too.
Starring Donald Duck, der Fuehrer's Face is a 1943 animated cartoon by the Walt Disney Studios. It was released as an anti-Nazi propaganda piece for the American war effort. Not only did this film win the 1943 Academy Award for Animated Short Film, it was also voted #22 of the 50 Greatest Cartoons of all time by members of the animation field.
This wartime cartoon was directed by Jack Kinney and features the hit song de Fuehrer’s Face written by Oliver Wallace and performed by Spike Jones and his City Slickers (reference: Cocktails for Two).
It has been said; Disney kept der Fuehrer's Face out of general circulation since its original release until it finally received an official U.S. video release in 2004. The reason for this was the propagandistic nature of the short and the depiction of Donald Duck as a Nazi (albeit a reluctant one).
During World War II, film audiences were looking for brasher, edgier cartoon characters. And, I believe, Disney delivered.