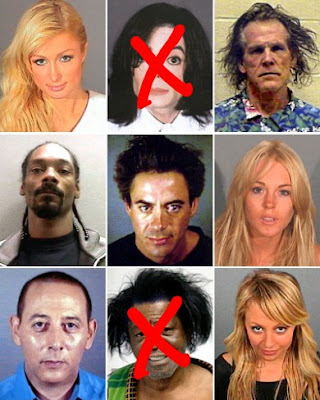 What is this, celebrity mugshot Tic-Tac-Toe? Not quite.

Each and every time a celebrity is arrested I am usually stunned when their mugshot is released on television or over the Internet. Jeez, folks, get it together. You spend most of your career in front of a camera, most of you are actors, couldn't you have composed yourself long enough to strike a pose for the officer behind the lens?

Take a good look at these celebrities. My guess is that Paris, Lindsay and Nicole at least had the forethought to ask for a moment in the bathroom before their mug was shot. This is one reason they carry such huge handbags.....makeup and a hairbrush. But, the guys - oh, my!

Come on, Nick, a little spit on the palms would have fixed that wild man of Borneo look you are sportin' there. In my opinion, smoothing your hair back would have given you the sympathy vote.

And, speaking of spit on the palms, poor PeeWee.

Now, Robert, those eyes look like road maps printed on glossy paper! Next time, and you know there will be, wear a pair of shades to keep those red and glassy peepers from showing.

Snoop, however, you somehow managed to rock your West Coast gansta look back and forth from the club to the station. Yeah, you've got swagger.

And, speaking of rocking back and forth, poor, poor PeeWee.

Okay, out of respect, I'll leave the dead alone.

Keep in mind, like your permanent record, your mugshot follows you around for the rest of your life. Please ask the nice officer, regardless of your circumstances, for a motivational moment prior to having your mug snapped.

Maybe with the exception of Nick and Robert, it would be difficult to pin the rap on the perp. But, luckily for all you law abiding readers, I have a way for you to hone your skills. There's an online game called Pick The Perp. Click on over, it'll be fun!