The Need For Speed!

Many of you commented on my last post about my son's motorcycle racing. Thanks for asking. So, to bring you up to speed, here's a post from October 2008 which may help to shed a little light. Oh, and you may click the photos for a closer look.

As a mother, all you want for your children is happiness and prosperity. And, when it comes to my son, he fills the bill. He's educated, independent and has a beautiful family of his own. He has also excelled in his career as a design engineer. What more could a mother ask for?
Since he was a little boy, Zac, has been a daredevil. It all started with his big wheel. It wasn't enough to peddle himself along the sidewalk, he had to find a hill to ride down; peddling with all his might he'd zoom down the hills faster than a speeding bullet. Oh, his outfit of choice - superman underoos with a towel-cape pinned to his shoulders along with a pair of cowboy boots. Wheeeeeeee! Get the picture?
Zac went through a number of bicycles and obtained the usual scrapes and bruises; however, nothing a little Bactine and a Bandaid couldn't fix. Then we went through our on-the-way-to-the-hospital-for-stitches phase. After two visits in one month, it was suggested by the ER physician that I chain Zac to the bed for the next few years. Yeah, right.
He then moved on to horses. Zac had what I referred to as "Black Beauty Syndrome". He would mount up (yep, still wearing cowboy boots) and off he'd ride at a dead run. I would remind him there were other gaits his pony was capable of; of course, he ignored me. One afternoon his pony, Scout, decided to show Zac a thing or two - he ran away - out of control - with Zac holding on for dear life. "Pull back", I yelled as they neared the fence. Scout stopped just short of the fence and Zac flew head first into the barbed-wire strands. Twenty-six stitches later, I restricted his riding.
Then came a series of four-wheelers and motorcycles...I held my breath. Aside from one minor accident, he made it through okay. Then, shortly after graduating from high school, Zac stripped the inside of his car, added nitros and participated in the 1/4-mile drags at the local raceway. He was awesome on the track; but, he did get a few tickets on the streets and roads for exhibition of speed. One night, as a friend and I listened to the police scanner, we heard the state police receiving registration and insurance verification for, none other than, Zac.
His fascinati 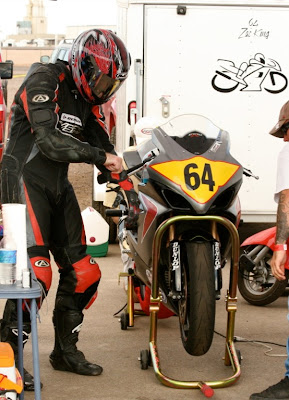 on for speed was never really satisfied until he began racing motorcycles on a flat track at 185 mph. The first time I went to the track to support my son in his latest thrill, well, I was taken aback by the equipment required - a one-piece, fully padded leather suit, heavy-duty leather gloves, special boots and, of course, a full helmet. He looked like a storm trooper.
So, I asked him to explain the object and the rules of the race. Remember, he's an engineer; his response turned into a dissertation, "First, you buy a bike...blah, blah, blah". However, the glaze cleared from my eyes when he began to talk about "the rush".....

"It starts 15 minutes before you are called to the grid. That nervous anticipation/excitement of putting your ass on the line to show your stuff and live out your dream. Then you roll out for the warm-up lap. Your excitement turns into sharp focus as you circle the track and line up in the grid. Now, the adrenaline really kicks in. The countdown starts with a two, then one - it can't happen fast enough. You are waiting for the release. Then it comes. GREEN! You do your best to get the throttle pinned and the clutch out. You tip into turn one with five to ten other lunatics hell bent on being first, you stake your claim and then rip the shit out of it!"
Good, lord!
Funny, I still see that little boy with the towel-cape as he laps the track. No doubt, he was born with the need, the need for speed! 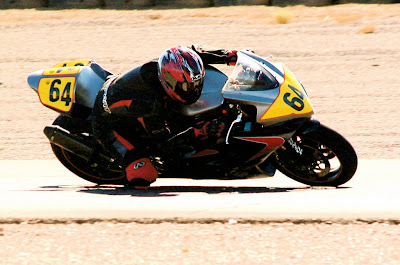