I've really had a time of it this morning with my computer. Seems that I had been attacked by "Polterbytes". Polterbytes is a word coined by my good friend, Bob Gately. You can find the definition listed here in the Urban Dictionary. Anyway, all appears to be back to normal after running three different programs that failed to detect any problems. *shrugs*
So, on with the post. Art Linkletter said it best, "Kids say the darnedest things". The perceptions kids have about love and marriage are funny, but they are really not too far off the mark. 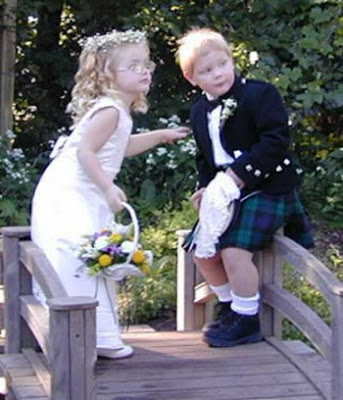 What do most people do on a date?
"Dates are for having fun, and people should use them to get to know each other. Even boys have something to say if you listen long enough." Lynnette, age 8
"On the first date, they just tell each other lies, and that usually gets them interested enough to go for a second date." Martin, age 10
What would you do on a first date that was turning sour?
"I'd run home and play dead. The next day I would call all the newspapers and make sure they wrote about me in all the dead columns." Craig, age 9
When is it OK to kiss someone?
"When they're rich." Pam, age 7
"The rule goes like this: if you kiss someone, then you should marry them and have kids with them. It's the right thing to do". Howard, age 8
Is it better to be single or married?
"I don't know which is better, but I'll tell you one thing. I'm never going to have sex with my wife. I don't want to be all grossed out." Theodore, age 8
"It's better for girls to be single but not for boys. Boys need someone to clean up after them." Anita, age 9
How do you decide who to marry?
"You got to find somebody who likes the same stuff. Like if you like sports, she should like it that you like sports, and she should keep the chips and dip coming." Alan, age 10
"No person really decides before they grow up who they're going to marry. God decides it all way before, and you get to find out later who you're stuck with." Kirsten, age 10
How would you make a marriage work?
"If you want to last with your man, you should wear a lot of sexy clothes, especially underwear that is red and maybe has a few diamonds on it." Lori, age 8
"Tell your wife that she looks pretty even if she looks like a truck." Ricky, age 10