In case you've been living under a rock, this is a very special week over at Humor Bloggers Dot Com. It's The 2nd Annual Halloween Humor Carnival where those mysterious and kooky humor bloggers are getting their spooky on. Join us.....if you dare!

No doubt, some of you people belong in a straight jacket. I could not believe all of your awesome submissions to Friday's Caption This! You really made it tough for The Impartial Panel of Three with almost 50 hilarious captions. Thank you all for playing!

The Panel has handed down their decisions with the following receiving most-honorable mentions.

The day the rabbit had to die!

Finally, A Pic worthy of upload to Adult Friend Finder!

Alas, Barry drew the short straw and it would be his buddy George who'd get to go to the costume party as Elmer Fudd. 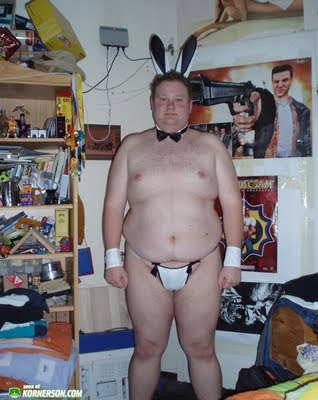 Bob found himself wondering what
traumatic event in his girlfriend's past
led her to this particular fantasy.

Okay,speaking of Humor Bloggers, I'm tired of being the odd-woman-out. Every Wednesday nonamedufus, EttaRose and the Soccer Mom all have their version of Caption This! No more Wacky Wednesday! for me - it's dead and buried.

I'll be joining the caption circuit each Wednesday with Me-Me's Playhouse: Caption This! So, mark your calendars for this week's special Halloween edition. See you then!