Wow! When I put this week's photo up for Caption This!, I knew you folks wouldn't let me down. You all came up with captions which are hysterical. Thanks so much for playing!

The Panel's decision this week was a hard one and, after much deliberation, have finally decided on a wiener....erm, I mean, winner. But, there are those who were very close and have received a most-honorable mention. The following rocked it with their captions:

nonamedufus said...
"The boys pose for a photo in which they demonstrate their excitement in coming from behind to win the Men's Tour de Pants."

Buggys said...
"I told them to follow the trail marked in red but 2 turned left, 2 turned right and 1 got lost!"

C: said...
"Peter, Dick, Willy, and Rod were nervous. They knew how excited Johnson was about this year's traditional post-race piggy back ride."

trash talk said...
"News Flash: Competition expected to be stiff. Home team lubed, packed and ready to explode off the starting line. More at the 10:00 news."

To see the rest of this week's captions submitted, go here. I promise, it's well worth the trip.

We have a winner!

This week's winner of The Golden Phallus is a newcomer to Caption This! Last week, in her first attempt to play, she received a most-honorable mention. Not bad, not bad at all. However, this week both of the captions she submitted were in consideration for the win! Everyone, please give a big round of applause for Malisa from Moonlight Hollow! Congratulations! I ask you all to please stop by her place today and follow her. 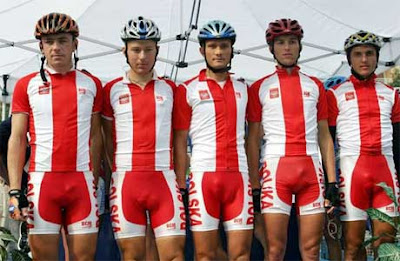 Thank you all again for playing. If you happen to run across a photo that you feel would make a great splash here for Caption This!, please email it to memeking2000@yahoo.com. Thanks!

See you next Wednesday!