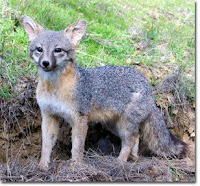 It’s been rather uneventful this week here at the ranch. Thanksgiving was extremely lovely; several friends came and went. I do have a new visitor though, Molly the gray fox. She’s been making an appearance for the past week or so and seems very healthy. Her coat is thick and beautiful and her tail is bushy.

Last time I was in town for supplies, I stopped at Marie Calendar’s in Sun City for a bite to eat before making the trek home. Sun City is a community designed for retirees. The majority live there full time while the others are snowbirds taking advantage of the extremely mild winters here. I’ve never seen so many Cadillacs and RVs in one place. Needless to say, driving in Sun City is done at your own risk – look out for those tanks!

I placed my order for the Fish ‘n Chips and my server quickly returned with my Arnold Palmer and dinner bread. I noticed a couple of tables occupied by elderly gentlemen dining solo. One nodded and smiled as I scanned the restaurant. Just as my dinner was brought to the table, two elderly ladies were sat at a table next to my booth. As they looked over the menu, a foursome of ladies was sat at the booth in front of me. I couldn’t help but stare – I’d seen blue-hair, but pink-hair? Wow!

As I munched on my delicious fish, I overheard the ladies at the table as they scoped out the gentlemen dining solo. One said, as she motioned towards the gentleman, “Bert’s available; he’s been widowed for seven years”. “His wife was from Norway, they came here from Minnesota.” “He used to drive a gold Cadillac, blah, blah, blah.” Her companion asked, “Does he date anyone?” Well, I wasn’t the only one eaves-dropping. One of the pink-haireds leaned towards the table and said, “No, not now anyway”. “You remember Myrtle, Myrtle Baker?” “They broke up when she moved to South Carolina to live with her son", then in a whispered tone, "the alcoholic.” Good grief - is no one’s life story sacred?!?

Both tables were rubber-necking to check who else was dining solo. Some conversation went back and forth again between the two tables. They were not at all shy about their motives. They all wore their casual best, painted faces, coiffed hair and, good lord, lots of perfume.

I could not believe it when one of the pink-haireds got up from the booth and approached Bert. She had a flyer in her hand. She walked up and boldly asked if she could sit down. He agreed. She went on and on about her bingo as the others would sneak a peek at their friend and would giggle after a comment was made under their breath. After 10 minutes of rambling, the pink-haired lady returned to her seat. I was surprised there wasn’t a round of high-fives the way they were carrying on.

Everyone had been served and was comparing their selections and trying to decide which pie they would order later. Then one of the pink-haireds offered the blue-haireds a flyer, an invitation to their bingo night. The blue-haireds were obviously pissed-off that they had made a move on the gentleman and refused the flyer. Talk about poor losers! They were behaving like junior high girls, "I saw him first." "No, I saw him first." Jeeez!

So, like the fox, I observed the same behavior in humans. It was the unmated females looking to hook-up and the unmated males were solo. Although I wanted to stay and take in more of this competitive nature; however, it was time for me to make my way back to the ranch. Pink Hair – 1, Blue Hair – 0.