This Bud's For You! 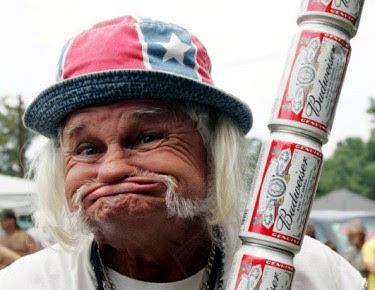 One day, two rednecks named Bubba and Earl were driving down the road, drinking a couple of Buds.

The passenger, Bubba said, "Lookey thar up ahead Earl, it's a po-leece roadblock! We're gonna get busted fer drinkin' these here beers."

"Don't worry Bubba", Earl said. "We'll pull over and finish drinkin' these beers, peel off the label and stick them to our foreheads, then throw the bottles under the seat."

"Just let me do the talkin'", said Earl. They finished their beers, threw the empty bottles under the seat and slapped the labels on their foreheads. When they reach the road block the sheriff said,

"You boys been drinkin?"


Hey, have you left your entry for this week's Caption This!? Pop on over for a chance to win!