past week's winner of Caption This! has a blog that I'm sure you will all enjoy getting to know. Since August, Adnoxious has brought to the blogosphere the best of the worst in television commercials.

"We're here to provide a throbbing eff-you to ad execs who really should have known better. When an advertisement underestimates our intelligence, establishes a flawed premise, or oversells its shitty product, we'll be there."

In other words, Adnoxious rips 'em a new one. Take a look at one of their posts here, I'm sure you'll be hooked.....
A1 + Meatloaf = Crippling Depression

Sometimes a fiasco is made so much worse when you can clearly see what they were trying to do (the budget-friendly Pinto) compared with the end result (a rear-ended Pinto filled with burning children).

What this commercial aims for is, of course, a chuckle based on the fact that the name of the food and the name of the guy are, like, totally the same. And they both are better off for A1's existence.

What they ended up with was an existential journey into the life of an aging pop star as he struggles against the crushing emptiness his fame and wealth have cursed him with. Mr. Loaf is clearly not in a good way in this ad. The day is well advanced, but he has yet to change out of his bathrobe. He, quite literally, is doing absolutely nothing but staring into the middle distance while he waits for his lunch to cook. And one look at this face... 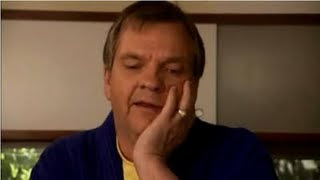 ...and you know that eating this chunk of ground meat is the absolute highlight of this guy's day. No wonder he's still in his jammies. Frankly, it's amazing he got out of bed at all.
Couple that with the facts that no one else is evident on the entire grounds of the estate and that he somehow has immediate access to an 8-foot bottle of steak sauce, and we've moved way, WAY past warning signs. Meatloaf is one broken shoelace away from a full-on mini-mall shooting spree.
And do you like how he tried to make his sad little lunch a little cheerier by eating it poolside? It's like when single chicks light a candle while they eat their Healthy Choice Cafe Steamers to make it seem romantic even though no one else is around except for a goldfish and a dog-earred Danielle Steele.
I respect Meatloaf, I dig some of his songs, and no one can question that he has made an indelible mark on the music scene. But after this ad, thinking about him, his obviously well-advanced Alzheimer's, or the sliver of hope and joy that A1 gives him makes me feel like my soul got butt-raped.
Hopefully, though, the guy who came up with this campaign will keep right on rolling: "Guar gum sales could use a boost, and I know who could probably use the money..."