Where does the time go? I mean, really, where does it go? There's a saying, "The older you get, the faster time flies". Not that I'm denying my age, but I think I much prefer the saying, "My, how time flies when you are having fun".

And we're definitely have some fun here. You people are hilarious! There were so many funny captions submitted for this week's Caption This!. Thank you all for playing.

The Impartial Panel of Three emailed several times over the past couple days stating they were unable to contain themselves. Their decision was tough. They have asked me to present most-honorable mentions to the following.....

"Madonna liked ALL of her new back-up dancers, but there was something about Nate that she just couldn't put her finger on..."

surveygirl46 said... Although his intent to lure his 5 year old twins away from Nicklelodean on Saturday mornings was a noble one, the terrified looks on their faces told Martin he probably went a bit overboard when he suddenly appeared at the breakfast table one morning, dressed as "live super-hero" Mr Party Favor.

this is why you never, ever, order your party stripper off craigslist

Marvin D Wilson said... "God, I need a new agent. This? This is the best part he could find for me?"

No one is certain, but Bert's permanent state of unemployment might have something to do with what he wore to job interviews.

Jeremy from We Took the Bait said...

Nobody enjoys casual Fridays at the Spa and Pool Emporium more than Calvin.

all know there can be only one winner of the coveted Golden Phallus. This week's winning caption goes to the the Humor Blogger known as Freak Smack. His blog, Smack A Freak At FreakSmack, is dedicated to the men and women who find themselves on the wrong end of the law. "This is a comedy site if you take the information here seriously maybe you should be smacked." Be sure to pay Freak Smack a visit today! 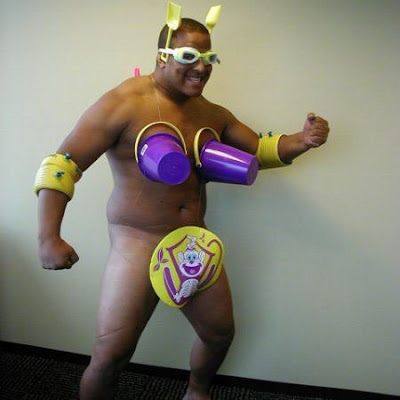 There are three rules for keeping a
Purple Tittied Water Wobbler

Thanks again everyone and I hope to see you all next week for another edition of Me-Me's Playhouse: Caption This!