We have a winner!

Thank you all for playing Caption This! The Impartial Panel of Three has handed down their decision for this week's photo. Before we get to the winning caption, the following have received a most-honorable mention.

Lee the Hot Flash Queen said.....Aerobic exercise is supposed to be good for that muffin top...at least that's what I heard.

The Old Silly said.....Will you please hold still so I can kick your ass?!

The winning caption was submitted by Dufus over at nonamedufus. He runs a caption contest over on his blog each Wednesday too. If you have stopped by his place before, be sure to do so. Congratulations, Dufus takes home The Golden Phallus!!! 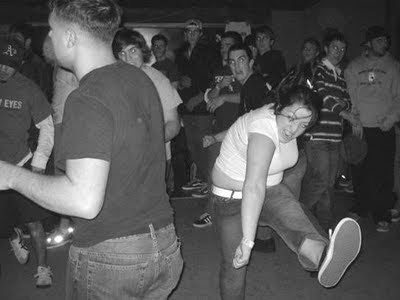 The guys on the football team were beginning to regret inviting
Barb to the cheerleader try-outs. She just seemed out of step.

Thanks again for playing, hope to see you all again next Wednesday. Until then, have a great weekend!