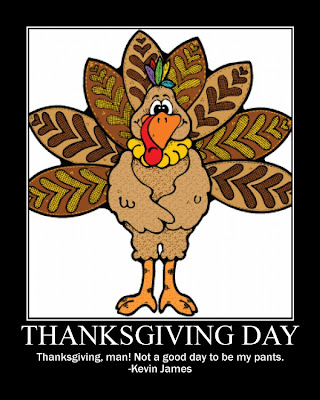 1. What is Thanksgiving? Family, turkey dinner and dress rehearsal for Christmas. - Unknown

2. I love Thanksgiving turkey... it's the only time in Los Angeles that you see natural breasts. - Arnold Schwarzenegger

4. Thanksgiving is so called because we are all so thankful that it only comes once a year. - PJ O'Rourke

5. We're having something a little different this year for Thanksgiving. Instead of turkey, we're having a swan. You get more stuffing. - George Carlin

6. I celebrated Thanksgiving in an old-fashioned way. I invited everyone in my neighborhood to my house, we had an enormous feast, and then I killed them and took their land. - Jon Stewart

1. Just spread the legs open and stuff it in.

3. That's the biggest one I've ever seen!

4. How long will it take after you stick it in?

6. Just reach in and grab the giblets.

9. Tying the legs together will keep the inside moist.

10. And he forces his way into the end zone!