The Fractured ABC's Of Christmas - L

L is for Laughing
O'er the fields we go
Look, here comes Santa
With his big ho, ho-ho

Wow, we had quite a few new players this week for Caption This! Thank you all for playing, we really had some awesome submissions. The Impartial Panel of Three have handed me their decision. But, before we get to the winning caption, we have several captions worthy of a most-honorable mention.

moooooog said:
Ed was sad about his dead friend, but like a real trooper, he tried to keep his chins up.

Ann said:
After getting rid of his little brother, Tim was finally the favorite son.

C: said:
I told him, "Touch my fries again and you'll be sorry," I said. But he wouldn't listen. Not touching my fries now, huh?

The Old Silly said:
Yeah. It was me, I farted.

This week's winning author is no stranger to Caption This! In fact, this is the second time he takes home The Golden Phallus. Put your hands together and give a big round of applause to.....Knucklehead! If you are not already a follower of Knucklehead's blog, you really must pop over, he's an awesome story-teller. Congratulations! 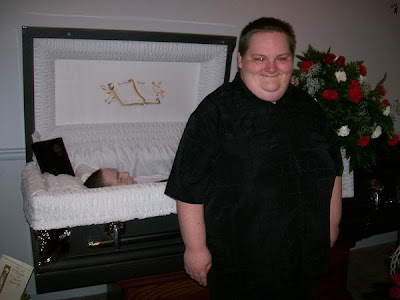 Five seconds later, with his shorts full of poop,
Walt realizedhe'd once again fallen for his brother Dave's
"Betcha thought I was dead" trick.

Thank you all again for playing, see you again Wednesday!