The Fractured ABC's Of Christmas - R


I just realized that today's winner will be the last winner of Caption This! 2009. Wow, what a year of great captioning by everyone. Thank you all for playing each week. I hope you will continue this tradition by continuing to play during 2010. (Sorry, isn't that redundant?)

The Impartial Panel of Three has made their decision. The Panel has asked me to give the following players a most-honorable mention.....

nonamedufus said:
Jesse's excuse was that he was drug free. But Bobby had no excuse for wearing that sweater.

Don said:
Nothing says Merry Christmas like a man and his bitch!

Leeuna said:
If you see my friend wandering around lost, please dial the number listed on his face and I'll come get him.

During 2009, this caption became a repeated theme...
Knucklehead said:
Hi, we're the Dyer Boys!
Yeah, okay, I guess you had to have been there.

Today's winning author is rather new to captioning has outdone all the rest and will take home The Golden Phallus. Give a big "hooray" to adrienzgirl over at Think Tank Momma. Her blog is full of humor and snarcasms, be sure to pop over and give her blog a read. And, while you are there, "Follow".

The moment you've all been waiting for, the winning caption! 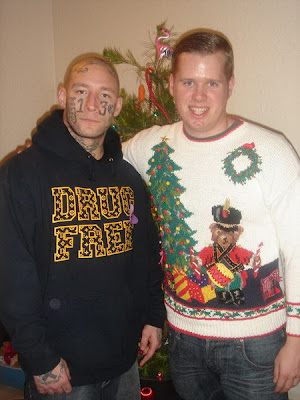 Our first Christmas after being released from prison
....a love story.