Kids today have it made when it comes to selecting cool Halloween costumes.  There are so many to choose from --Star Wars characters, super heroes, Lego people and realistic monsters and freaks of all types.

If I were going door-to-door trick or treating, I would choose to be a ninja. Ninjas are brave martial arts masters and possess strategic knowledge which is way superior to anyone else walking the planet. They are in perpetual stealth mode which allows them to make their strikes totally undetected.

Ninja assassin fashion is your basic black garb which portrays that sense of invisibility. Plus, they have the coolest accessories like stars, claws, swords and smoke bombs.  Unfortunately, ninja warriors have been over-commercialized and the prepackaged costumes have strayed far from the traditional ninja uniform.

Below is an interesting critique from a real ninja of a kid's ninja costume which can be purchased online or from a big box store. 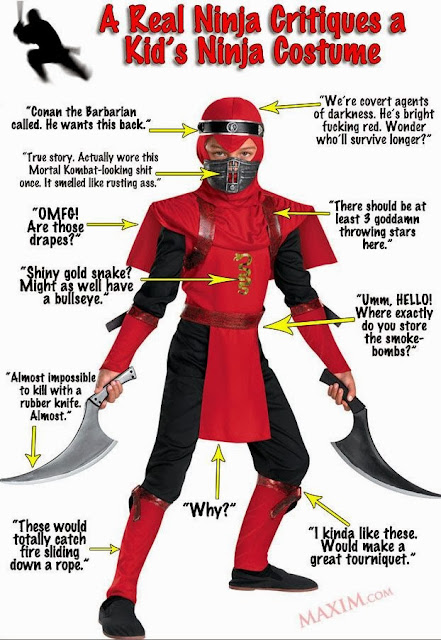 You didn't see me did you?