It's just another manic Monday.....
Here we are again, folks. It's Monday! Before I announce the "Caption This!" winner, here are today's "On This Day In History" events.
1776 - The Virginia state constitution was adopted.
1967 - Actress Jane Mansfield died at age 34.
1972 - The Supreme Court ruled the death penalty could constitute "cruel and unusual punishment".
2003 - Actress Katherine Hepburn died at age 96.
2007 - The first iPhones went on sale.
Now, let's get on with the show.....
According to The Impartial Panel of Three, this was really tough. In fact, they almost came to blows before reaching their decision. This installment's most-honorable mentions are Chris @ Maugeritaville, Moooooog, Chickenista and Wolfgang. Congratulations!
The envelope please.....

The winning caption for Me-Me's Playhouse: Caption This! No. 8 is a man that has so much time on his hands that he has not one, but two hilarious blogs. Stand up and take a bow Joel Klebanoff, you are the winning author! Please click over and visit Joel over at Stuff & Nonsense or at Shalampax for more hilarity. Joel takes home The Golden Phallus and 500 EC credits.....congratulations!!!
Thank you all for participating and I hope to see you here again! 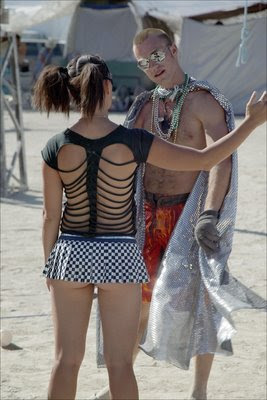 "Does my butt make this outfit look phat?"

Labels: caption this winner, humor, on this day