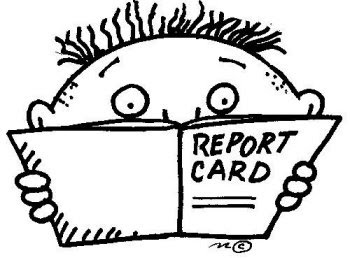 Not that I was ever a "bad" student, but there were those times during my grade school years that I absolutely dreaded taking home my report card. It wasn't the grades that made me consider running away from home just to escape "the look" I would get from my parents, it was those damn comments the teachers would include.

I mean, I could always explain away an unacceptable grade, but trying to explain those remarks on the back of my report card was a tough sell. Then I got a load of these actual comments from a New York school system and thought, "Me-Me is a daydreamer and is not working at her full potential due talking out of turn and wandering around the classroom at inappropriate times" wasn't so bad.

1. Since my last report, your child has reached rock bottom and has started to dig.

2. I would not allow this student to breed.

3. It's impossible to believe the sperm that created this child beat out 1,000,000 others.

4. Your son is depriving a village somewhere of an idiot.

5. Your son sets low personal standards and then consistently fails to achieve them.

6. The student has a 'full six-pack' but lacks the plastic thing to hold it all together.

7. This child has been working with glue too much.

8. When your daughter's IQ reaches 50, she should sell.

9. The gates are down, the lights are flashing, but the train isn't coming.

10. If this student were any more stupid, he'd have to be watered twice a week.

11. Your child has delusions of adequacy.

12. The wheel is turning but the hamster is definitely dead.