Variations On A Theme

No doubt, I have a lot of time on my hands. I often sit and dwell on the ridiculous. The one subject that seems to repeatedly roll around my head is the meaning of words or how their meanings came to be.

Take the word crap, for example.

According to dictionary.com, the origin of crap dates back to 1425 A.D. Crap was generally applied to things cast off or discarded (e.g. "weeds growing among corn"). During the 1440's, crap was the underworld's slang for "money". Then, in 1898, the word crap was first recorded to mean "rubbish, nonsense".

Modern day use of crap has become commonplace and takes on many meanings.

2. to defecate
You're dog crapped on my lawn!

4. junk, shoddy
Get your crap out of here!

As a verb, there are also phrases using crap.

1. to avoid work
Don't crap around the office!

5. to act foolishly
Cut that crap out!

6. to deceive
What a load of crap!

So, what's this all leading to? Oh, crap! 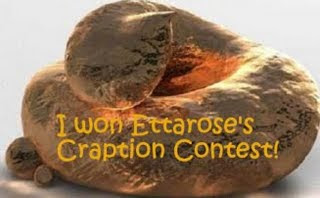 Look at this magnificent pile of crap! Thank you, Ettarose, for the prized Golden Feces Award! Wanna win your own pile of crap? Check out Etta's blog, Sanity on Edge, each Wednesday for her craption contest.

Now, for the photo and my winning caption..... 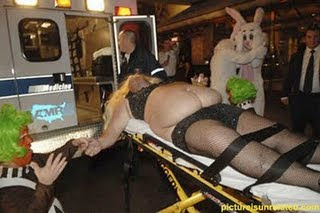 What happens in Vegas, stays in Vegas.

Don't crap out and miss this week's installment of Me-Me's Playhouse: Caption This! There's still plenty of time to enter...click here.