The Week That Was

Here it is, Monday...again. Last week The Screaming Me-Me hit a couple of milestones. I celebrated my 200th post with Kool-Aid, It Ain't Ghetto plus the 200th follower signed on to my list of stalkers, Mrs.BlogALot...salute!

Last week we also visited Japan and took a look at their tradition in celebrating Halloween with the Oh-Bone Festival along with at look into Hell's Kitchen to sample some out of the ordinary recipes. In addition, I won Ettarose's Craption Contest and was presented The Golden Feces Award. That was the week that was!

I have received the decision from The Impartial Panel of Three for Caption This! No. 14. You people are hilarious, I'm glad it wasn't me that had to make the final decision among the captions submitted for last week's installment of Me-Me's Playhouse. Thank you all for playing.

Before I announce the winning caption, there were several of you with creative efforts that the judges felt deserving of a most-honorable mention. They are.....

I feel pretty. Oh so pretty.

MikeWJ at Too Many Mornings said...

"Ok..for this next pose I want you to look skyward and pretend that your dignity is up there."

"Today? Why, it's Christmas Day, Mr. Scrooge, you silly goose!"

Buddy made the best of the wardrobe malfunction for his solo of "Somewhere over the Rainbow".

The winning author takes home the lovely and shiny Golden Phallus for their trophy case plus 500 EntreCard credits. The winning author is...Adnoxious! Congratulations, stand up and take a bow! Be sure to stop by Adnoxis' blog, there you'll find a throbbing eff-you to the ad execs who really should have known better. 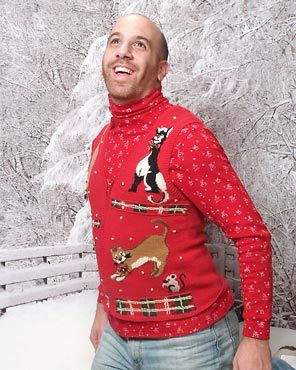 "Don we now our gay apparel."

Thanks again everyone for playing, I hope you will all stop by again this Friday for another installment of Me-Me's Playhouse: Caption This!