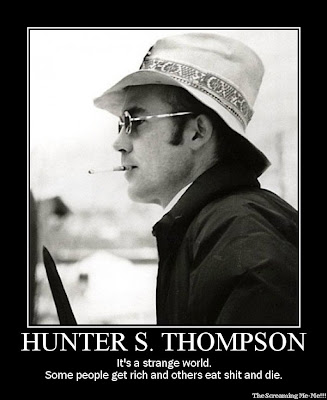 When the going gets weird, the weird turn pro.

There is nothing more helpless and irresponsible than a man in the depths of an ether binge.

The music business is a cruel and shallow money trench, a long plastic hallway where thieves and pimps run free, and good men die like dogs. There's also a negative side.

The Edge... there is no honest way to explain it because the only people who really know where it is are the ones who have gone over.

Politics is the art of controlling your environment.

It was the Law of the Sea, they said. Civilization ends at the waterline. Beyond that, we all enter the food chain, and not always right at the top.

In a closed society where everybody's guilty, the only crime is getting caught. In a world of thieves, the only final sin is stupidity.

I wouldn't recommend sex, drugs or insanity for everyone, but they've always worked for me.

I feel the same way about disco as I do about herpes.

Going to trial with a lawyer who considers your whole life-style a “Crime in Progress” is not a happy prospect.

For every moment of triumph, for every instance of beauty, many souls must be trampled.

America... just a nation of two hundred million used car salesmen with all the money we need to buy guns and no qualms about killing anybody else in the world who tries to make us uncomfortable.

Some may never live, but the crazy never die.