Just The Facts: The Animal Kingdom 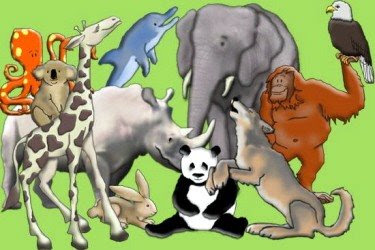 1. Nearly 80% of all animals have 6 legs.
2. The first contraceptive was crocodile dung used by the ancient Egyptians.
3. Count the number of cricket chirps in a 15-second period, add 37 and your result will be very close to the actual indoor Fahrenheit temperature.
4. It is illegal to hunt camels in the state of Arizona.
5. A pregnant goldfish is called a twit.
6. Studies show, if a cat falls off a 7th floor building it has about a 30% less chance in surviving than a cat that falls off the 20th floor.  It supposedly takes about 8 floors for the cat to realize what is happening, relax and correct itself.
7. A whale's penis is called a dork.
8. To escape the grip of a crocodile's jaws, push your thumbs into its eyeballs - it will let go instantly.
9. An ostrich's eye is larger than its brain.
10. The male gypsy moth can "smell" a virgin female gypsy moth from 1.8 miles away.
11. A horse can look forward with one eye and back with the other eye.
12. The fingerprints of koala bears are virtually in distinguishable from those of humans, so much so that they can be confused at a crime scene.
13. Over 1,000 birds die each year from smashing into windows.
14. If you place a tiny amount of liquor on a scorpion, it will instantly go mad and sting itself to death.
15. A pig's orgasm last 30 minutes.