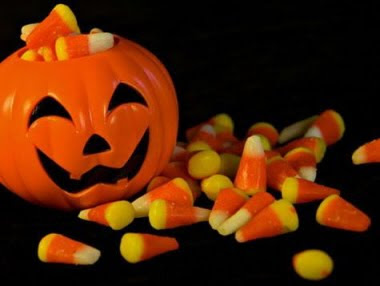 The Halloween tradition of going door-to-door begging for candy dates back to the middle ages. It resembles the medieval practice of "souling", where poor people would go door-to-door receiving food in return for their prayers for the dead on All Saints Day (November 1).

As a trick-or-treating kid, my bag was always full of delicious treats. In addition to the Tootsie Rolls, Milky Ways and candy corn, there were those moms in the neighborhood that would make marshmallow treats, popcorn balls and caramel apples and would place them neatly wrapped in my bag. I hurried from house-to-house in anticipation of returning home to sample all that was holy.....candy!

My parents were cautious, they would inspect my bag of goodies and take out those things that looked suspicious - like the Almond Joys and the Hershey bars. Come on, this was the 60's. This was a time when the practice of tainting candy really wasn't an issue. However, I continued this practice with my own children just to get my hands on the candy!

After the inspection of my bag, I would head to my room and start hiding my candy like a squirrel hides his nuts. I'd put a little here and put a little there hoping to make it last until Christmas. I had a stash that was never too far from my reach, even after the lights went out. Oh, how I love candy!

The day would finally come when my many stashes were depleted. I must have candy! I'd go to my sisters, who had also squirreled their candy away, seeking my sugar fix. Sadly, they had depleted their reserves as well. I'd even check with the other kids in the neighborhood. The dark circles under my eyes, the incoherent chatter and my stumbling swagger were clear signs that I was nothing more than a junkie out roaming the neighborhood looking to satisfy my jones for candy.

Yes, there have been those years when I've had to go back to the store the afternoon of Halloween to replace the candy I had bought a week or so in advance. By this time, I didn't care what I gave the trick-or-treaters. I would buy the gigantic variety bag of candy that wasn't quite as appealing as the Hershey Miniatures and the Milky Ways I had bought the week before. Oh boy, the looks these masked kids would give me as I dropped a few Dum-Dums or those black and orange taffy things in their bags were daunting. I felt the shame.

Halloween, to me, was and still is.....all about the candy. So, if you see an adult dressed like Thomas the Train at your door this year, think about me. Be sympathetic. There are many of us out their that relive this shame every year. Be generous. We may not soap your windows or TP your lawn, but your credit report could definitely be in jeopardy.