Here we go! We have a winner!

Thank you all for playing Me-Me's Playhouse: Caption This! Several of you have received a nod from The Impartial Panel of Three. The following receive a most-honorable mention for your efforts in this week's captioning contest.

moooooog said:
New photos suggest that Sir Edmund Hillary did not, in fact, die on Mount Everest but is instead living a lavish life with sherpas as a transvestite prostitute.

Marvin D Wilson said:
It's the hormone injections. Saving me from dying of colon cancer, but now I find myself watching Oprah.

Knucklehead said:
Strip poker turned out to be a bad idea at the recent Congressional Campout.

Freak Smack said:
At sea level Grandpa's a typical old-man, bingo at 3, early bird at 4, 5 o'clock news in bed, but get him in the mountains and he parties like he's J. Edgar Hoover!

These are great, aren't they?

Here we go! This week's winner of The Golden Phallus goes to Danica!!!

Uh oh, I'm unable to access Danica's profile to give her/his blog a plug. Darn it! 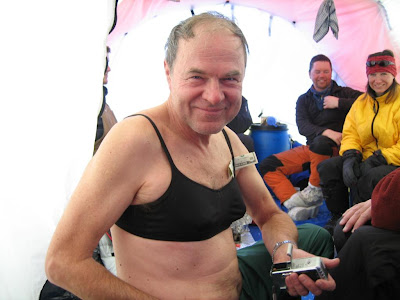 Steve was a busy man. Evidently, he didn't heed the warning of
"Wait 'til we get our Hanes on you."

Hope to see you all again this Wednesday for the special Thanksgiving edition of Caption This!