The Fractured ABC's Of Christmas - V

V is for Vixen
A Christmas dear so fine
To Caption This! photo
You need just one clever line


Okay, alright! I screwed up. There, I admit it. This past Saturday when the winner was announced for last week's Caption This!, I mistakenly said this was the last winner in 2009. It is, in fact, this week's contest winner that will be the last in 2009. Excuse me!

Now, that's out of the way, I really had a terrible time deciding which photo I would use this week. I was torn between two photos that truly relate to today's featured letter plus, not to mention, my attempt at being clever for the 23rd-fucking-day in a row for this ongoing Fractured ABC's of Christmas series. What in the hell was I thinking? Oh, yeah, now I remember - Dufus!

Soooooo, here's the first photo I was considering for Caption This! until I realized that moooooog would have been all over this, literally! 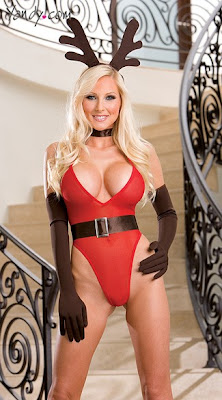 Now, that's some Vixen, huh guys? It appears she might be pulling something for Santa other than his sleigh, those antlers are definitely a tell-tail sign. But, really, how much can you say about a chick with fake boobs and legs up to her neck giving you that come hither look? By the way, you can see more of Vixen and the rest of Santa's helpers at Yandy.com. You're welcome. Next.

Soooooo, I have decided that the next photo is absolutely perfect for wrapping up the year. By now, you should all know the frickin' rules. Study the photo, think about it, then enter your caption in the comments below. Oh, and be sure to enter often...fa-la-la-la-la.

The lucky winner takes home The Golden Phallus and will be announced here Saturday which, coincidentally, ends this stupid-ass ABC's series Dufus challenged me to. Okay, maybe he didn't really challenge me....but, like a junkie searching for a fix, I was desperate to keep him from scooping me just because of some lousy time zone law!

Scroll on down for this week's photo. 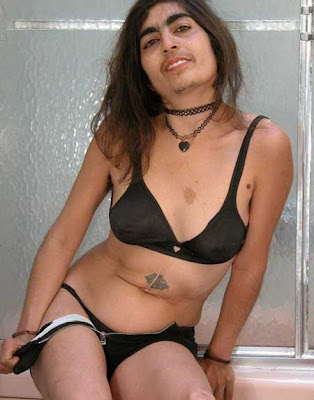 
If you really like captioning, drop on by these blogs: nonamedufus, EttaRose and Soccer Mom, plus that Old Silly, Marvin, has his contest up tomorrow. And, please don't forget to pop on over to the Humor Bloggers 2nd Annual Christmas Carnival. Oh, and just one more plug - please vote for me over at Humor-Blogs, I need just 10 votes to recapture the numero uno position....thanks. You may leave now.