Yes, the Impartial Panel of Three has handed down their decision for this week's Caption This! But, before we get to the winning caption, the following have received a most-honorable mention.....

Mrsblogalot said:
"This is a job for Bearded Cigar Woman!!!"

moooooog said:
"In his defense, the camera really does add ten pounds."

Lauren said:
"Upon his release from wardrobe rehab (as captured in this recent photo), child star Harvey Wallbanger, the last surviving munchkin from the Wizard of Oz, writes tell all book entitled, "OZ S&M Scandals. What was really hidden behind the Wizard's curtain."

This week's winner is none other than Chris at My Virtual Attic. Congratulations, Chris, stand up and take a bow, you have won The Golden Phallus!

You all might want to stop by Chris' place today because he's one heckuva nice guy and the only one you might wanna chase out of town with torches and pitchforks. 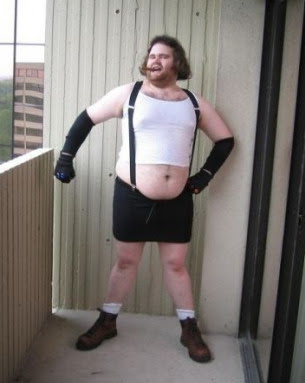 Hugo's anti-sexual discrimination lawsuit
finally paid off, and HOOTERS was forced to hire him.

Thank you all for playing Caption This!, I hope to see you again next week. Until then, have a great weekend.