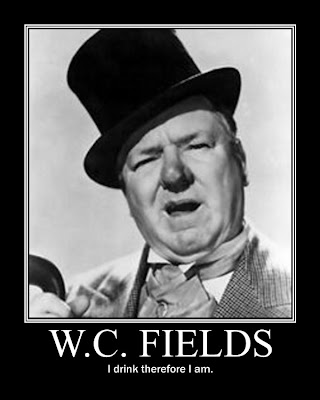 Fields’s screen character was often fond of alcohol and this trait has become part of the Fields legend. In his younger days as a juggler, Fields himself never drank, because he didn’t want to impair his functions while performing. The loneliness of his constant touring and traveling, however, compelled Fields to keep liquor on hand for fellow performers, so he could invite them to his dressing room for companionship and cocktails. Only then did Fields cultivate a fondness for alcohol. ---Wikipedia

1. I can't stand water because of the things fish do in it.

2. I'm free of all prejudices. I hate everyone equally.

3. No doubt exists that all women are crazy; it's only a question of degree.

5. Never give a sucker an even break.

6. Start every day off with a smile and get it over with.

7. There are only two real ways to get ahead today - sell liquor or drink it.

8. Women are like elephants. I like to look at 'em, but I wouldn't want to own one.

9. A rich man is nothing but a poor man with money.

11. Anyone who hates children and animals can't be all bad.

13. If at first you don't succeed, try, try again. Then quit. There's no point in being a damn fool about it.