Hello all and thank you for playing the Olympic edition of Caption This! As you can see the guy in the photo has definitely confused the day's event...the luge. He thought the call was for the loo and attempts to mount the throne at the starting line.

The Panel has handed down their decision and the following have received a most-honorable mention......

Tgoette said...
"I am Dukiyama, defender of the toilet bowl. Beware my almighty stench!"

Lee the Hot Flash Queen said...
"Yogi has his game face on as he makes his first attempt at toilet diving. The key is to have very little splash and to try to not disturb the turd in the pot."

Today's winning author and recipient of The Golden Phallus is the one and only..... Mrs. Blogalot!!! Congratulations, rise from your throne and take a bow!

You really must pay her a visit today and follow her, here's just one reason why.....she would actually drink tomato sauce from the can if it were socially acceptable. Like Jerry Seinfeld, Mrs. Blogalot definitely offers a new spin on life's day-to-day ups and downs. Bet your bottom, her blog is positively a must read. 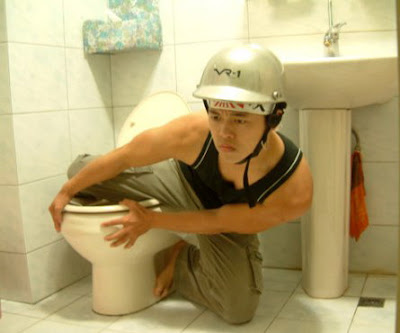 "As Young Flush takes the lead in the imaginary Tidy
Bowl games, visions of coming in number 2
again spurs him on to victory!"

Again, thank you all for playing, hope to see you here again next week. Have a great weekend!